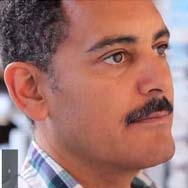 Known as a provocateur, Oakland-based painter David Huffman’creates dense psychological worlds that meld social commentary and science fiction. His paintings operate between figuration and abstraction, between narrative and pure formalism. He is often identified with the Afrofuturist movement.

Since the beginning of his career in the mid-1990s, Huffman has explored themes of politics, race, power and conflict, often utilizing controversial imagery. Watermelons, pyramids, UFOs and his distinctive astronaut minstrel figures (“traumanauts”) populate his paintings and make powerful allusions to African-American life. These humanoid explorers, cartoonish in their rendering, are poignant symbols for cultural homelessness, discovery and the plight of black folks as they negotiate an embattled past and an uncertain future. Later works no longer feature traumanauts but continue to explore the politics of race in works that limit his iconography to the image of the basketball in combination with an abstracted deep space created of layered tones of browns and blacks

Huffman received his MFA from the California College of the Arts in 1999. His work has been shown nationally and internationally at ICA, London; Iniva, London; the Studio Museum in Harlem; Santa Monica Museum of Art; CCA’s Wattis Institute for Contemporary Art, San Francisco; YBCA, San Francisco; the San Jose Museum of Art; the Crocker Art Museum, Sacramento; Berkeley Art Museum; and the Oakland Museum of California, among others.

He is the recipient of the Fleishhacker Foundation Eureka Fellowship, the Artadia Foundation Award, and the Barclay Simpson Award.