After graduating RISD in 1984, I took a job in Florida with a small design firm that also did some advertising. I found that I had a knack for marketing, which led me to pursue work as an Art Director for ad agencies in Chicago. I’d always wanted to live in a big city, and Chicago provide plenty of everything that a young man starting out could desire. I had a great time, working hard and steadily advancing through a series of positions. After marrying my wife Katia in 1998, we moved to San Francisco to enjoy life in the most beautiful city in America. By this time I had risen to the position of Creative Director, overseeing the production of ads and materials for a wide range of clients. The job was intense and demanding. By 2003, after 18 years in advertising, I found myself at a career crossroad. The hands-on creative work I enjoyed had been replaced by dull managerial duties. Ultimately I concluded that it was time to change course– but which direction?

For some time I’d had an urgent desire to paint. After a long day spent wrestling creative problems at work however, I found little energy left over for myself. In order to help refocus, I decided to take a sabbatical from advertising. It was slow at first. My drawing abilities had atrophied somewhat during their long hiatus. Like muscles warming to exercise though, I found the rhythm and was soon able to pick up where I’d left off. Luckily I had a good idea about the kind of work I wanted to do. While at RISD, I’d learned of a new genre called “photorealism”. This movement began in the mid-60’s, as a reaction to the art world’s 30 year abstract fixation. It adhered to the classical disciplines of drawing and draftsmanship while emphasizing truth, precision and purity.

This message appealed to me. Although I respect all styles of art, my personal taste favors those which demonstrate craft and a mastery of material. I also felt that the time was right for representational art to be rediscovered and appreciated anew, since it had been out of the spotlight for so long.

In 2005 our family moved to Minnesota. Although we loved California, the cost of living there while raising two small children had become prohibitive. We chose Minneapolis due to the wonderful combination of city/country, excellent schools, business environment and overall quality of life. Having painted in San Francisco, Los Angeles and New York, I was thrilled to find fresh new subjects of interest so close to home. I continue to paint full time and am gratified by the positive response to my work from around the world.
www.holmespaint.com 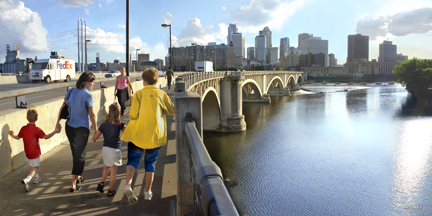