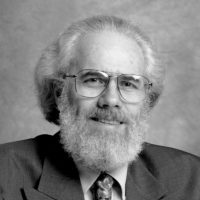 Born and raised in York, Pennsylvania, David Engdahl was surrounded by the rich history of woodworking and handcrafting practiced by both his father and grandfather. He was also influenced by his mother, an impressionist painter of regional note. These early artistic influences were augmented by the Engdahl’s formal education. He received a degree in architecture from Pennsylvania State University, worked for a Frank Lloyd Wright devotee, and was chief architect for a Florida design-build firm prior to his retirement. Together, these experiences led Engdahl to the creation of the organic wood forms for which he is known today.

The majority of Engdahl’s works are crafted from lauan, a malleable species of wood related to mahogany. They appear hand-carved – but, in fact, they are actually layers of plywood, cut in precise shapes from detailed, hand-drawn plans and glued together. The works are then sanded and finished. Engdahl calls the medium lamelliform. The artist’s work is in public and private collections, including the Orlando Art Museum in Florida, the Huntsville Museum of Art in Alabama and the Wiregrass Museum in Dothan Alabama.

Engdahl has had works exhibited under the Art in Embassies Program in Bahrain, Latvia, Angola and Zimbabwe.

‘The limits are only what I can think of and accomplish myself.’ 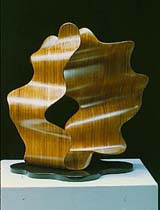