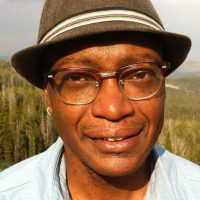 Daniel Minter is a painter, illustrator and art educator. The ninth of twelve children, Minter was born and raised in Ellaville, a small town in south Georgia. His skills as an artist were recognized and encouraged early in his youth, giving him a particular responsibility and place within his family and rural community. Much of Minter’s artwork reflects abiding themes of displacement and diaspora; ordinary/extraordinary blackness; spirituality in the Afro-Atlantic world; and the (re)creation of meanings of home.
Minter’s paintings, carvings, block prints and sculptures have been exhibited both nationally and internationally at galleries and museums including the Seattle Art Museum, Tacoma Art Museum, Bates College, Hammonds House Museum, Northwest African American Art Museum, Museu Jorge Amado and the Meridian International Center.The Mia Gallery, Greenhut Galleries, the Soren Christensen Gallery. A graduate of the Art Institute of Atlanta, Minter began his career as an artist in that city before moving to Seattle in 1992 where his professional stature grew. In 1994, Minter received a travel grant from the National Endowment for the Arts enabling him to spend a year in Salvador, Bahia, Brazil where he established relationships that have continued to nurture his life and work in important ways.
Minter also lived in Chicago and Brooklyn before moving to Portland, Maine where he now resides with his wife, Marcia, and their son, Azari Ayinde. From his base in Maine, Minter uses his art as a tool for dialogue with his community. He is the co-founder and creative visionary of the Portland Freedom Trail, a system of granite and bronze markers that constitutes a permanent walking trail highlighting the people, places and events associated with the anti-slavery movement in Portland. Minter’s work also marks the Malaga Island Trail which remembers the Black, European and Native American residents of the island who were forcibly removed by the state of Maine in 1912.
Minter serves on the Maine Arts Commission and teaches at the Maine College of Art. He serves as board chair of The Quaglia Institute for Student Aspirations and is a member of Partners of the Americas, having been chosen for their artist exchange program with Natal, Brazil in 2012. Minter’s additional recognitions include the James Washington Jr. sculptor-in-residence (Seattle, WA) and the Sapelo Island artist-in-residence (Sapelo Island, GA).
Minter has illustrated ten children’s books, including Ellen’s Broom which won a Coretta Scott King Illustration Honor; Seven Spools of Thread: A Kwanzaa Story, winner of a Best Book Award from the Oppenheim Toy Portfolio; and The Riches of Oseola McCarty, named an Honor Book by the Carter G. Woodson Awards. Minter served on a team of artists commissioned by the City of Seattle Parks Department to design a water park in an urban Seattle neighborhood. He was tasked with developing a concept transforming water cannons that initially had the appearance of guns, into more friendly water features that do not inspire violence. He was also commissioned in both 2004 and 2011 to create Kwanzaa stamps for the U.S. Postal Service. 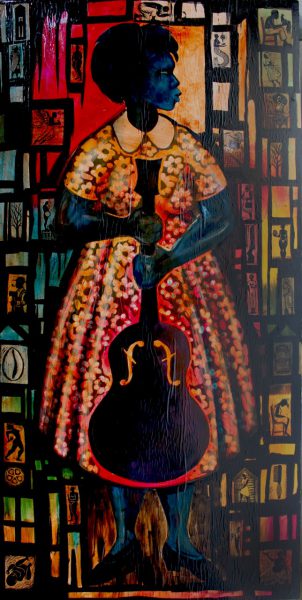 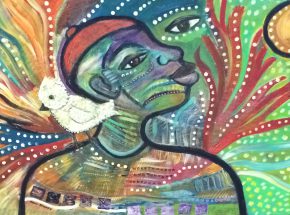