Cyrennius Hall was an itinerant artist who painted Western landscapes in a lumanistic style. He first went to Portland, Oregon in 1853 and 1854 over the Oregon Trail. From there he executed views of Mount Hood and Mount Rainier.

Hall was active in the American West from 1852-1878, and especially in the 1870’s. He again returned to the Portland area in the late 1860’s. During his travels throughout the West he painted for a period in Canada.

Very little is known of Hall’s professional studies other than he did go abroad to Munich further his career. In addition he was active in Chicago and New York City. His penchant for travel even took him as far as South America on a painting sojourn.

His single most notoriety as a painter came from the fact that he painted Chief Joseph on his perilous journey to the Colville reservation in the State of Washington in 1878. A portrait of the famous chief done by Hall hung in the National Gallery in Washington, D.C.

Hall exhibited at the National Academy of Design, New York City in 1873. His work can be found in a number of public and private collections. 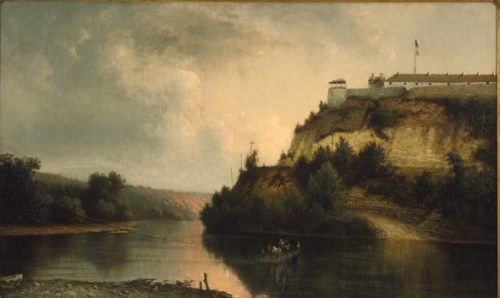