Corwin “Corky” Clairmont is a celebrated contemporary artist, combining his experience as a native person and tribal member with a post-modernist view of the realities of life as indigenous people struggle to retain their identities and sovereignty into the 21st century. He is also a teacher, mentor, community activist, and member of the Montana Arts Council (2008-2013). A member of the Confederated Salish and Kootenai Tribes, Clairmont has been the art director at Salish Kootenai College since 1984. Previously, he was an instructor and printmaking department head at Otis/Parsons Art Institute in Los Angeles.
Corky holds a Bachelor of Arts degree from Montana State University – Bozeman, did a graduate fellowship at San Fernando State University (California), and received an Master of Fine Arts degree from California State University at Los Angeles. His work has been exhibited from coast to coast and around the world, including Germany and New Zealand, and has been reviewed by The New York Times. He also designed the cover and emblem for the American Indian Library Association and a large granite warrior memorial for the Confederated Salish and Kootenai Nation in 2007.
Through the years, he has served on many professional boards, curated and juried many art shows, and he has received a Ford Foundation grant, NEA and MAC grants, a fellowship award from the Eiteljorg Museum in Indianapolis. Most recently, Corky was awarded the 2008 Montana Governor’s Arts Award for Visual Art, and was Holter’s Cultural Crossroads artist-in-residence in October 2009.
With humor as stories and hard-hitting imagery – in collages, monoprints, and mixed media pieces – Clairmont uses his art to reclaim Indian history and to draw attention to the prejudice Indian people experience, challenging viewers to re-examine accepted versions of historical events, whether it is the story of Columbus or the 1855 Hell Gate Treaty creating the Flathead Reservation. The present work, Indian Land Passage Denied is from “Native Perspectives on the Trail: A Contemporary American Indian Perspective,” a project sponsored and exhibited by the Missoula Art Museum (and co-curated by Clairmont) on the occasion of the Bicentennial Commemoration of the Lewis and Clark Expedition, the first U.S. expedition across the country to the Pacific coast (1804-6). The exhibition made a state-wide tour and provided and important inclusive avenue for contemporary American Indian artists to develop and express a long ignored perspective.
www.holtermuseum.org; www.missoulaartmuseum.org; art.mt.gov/about/councilinfo/about_clairmont.asp 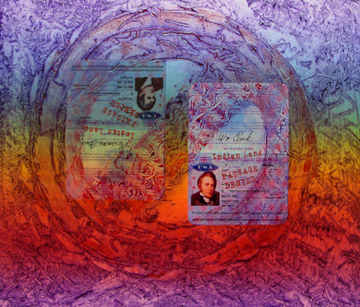