Seemingly photographic, Clifford Smith’s images of ocean fields as well as urban and rural landscapes are revealed on direct observation to be sensuously painted, reflecting the artist’s attention to texture and surface. They are also blends of different moments in time, evoking a deeper and more spiritual understanding on the part of the viewer of the essence of a subject. That Clifford Smith’s compositions appear to extend beyond the perimeters of a work’s frame engages us in a heightened awareness of the composite and transient nature of experience. At the same time, by involving the totality of the picture plane in his works, Smith brings out the conflict between the three-dimensionality of life and the two-dimensionality of the painted representation. His images evoke the tension in our world today between perception and reality. Among the artists Smith admires are Caravaggio, John Constable, and contemporary painters such as Rackstraw Downes, Frank Stella, and Gerhard Richter. The breadth of Smith’s sources underscores his passion for uniting direct observation with conceptual understanding. 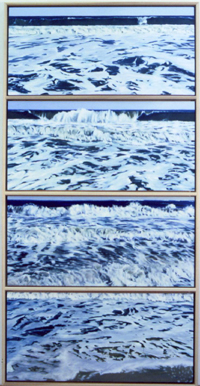