Although not well known nationally, Clement Reeves Edwards gained a reputation as a regional artist of the 19th century, primarily painting landscapes and portraits.

Edwards was born in Salem County, New Jersey. His career as an artist began with an apprenticeship to a sign painter in 1838. He soon opened his own studio and began painting portraits. He is thought to have lived in New Jersey, Ohio, Pennsylvania, and Maryland. In March of 1847, he enlisted in the First Maryland Regiment and fought in the U.S.-Mexican War. Upon his discharge in 1848, he moved first to Cincinnati, then to Louisville, and finally to Bowling Green, Kentucky, where he set up a photography and portrait studio. He took up farming in 1871 and died in 1898. 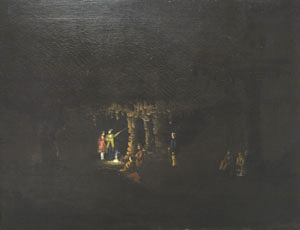