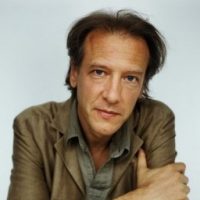 Christian Marclay is a New York based visual artist and composer whose innovative work explores the juxtaposition between sound recording, photography, video and film. Born in California and raised in Geneva (Switzerland), his mother was American so he held a double nationality. He studied at the Ecole Supérieure d’Art Visuel from 1977 – 1980 in Geneva, Switzerland. From 1977 – 1980 he studied sculpture at the Massachusetts College of Art in Boston. He also studied as a visiting scholar at Cooper Union in New York in 1978. As performer and sound artist Christian Marclay has been experimenting, composing and performing with phonograph records and turntables since 1979 to create his unique “theater of found sound.” Christian Marclay was influenced by Marcel Duchamp. Christian Marclay offers a unique, fresh and innovative voice that has inspired an entire generation of musicians, artists and theorists.
As a student at the Massachusetts College of Art Christian Marclay developed his interest in performance art and punk rock. It was the music world that inspired him versus the art scene. As Christian says in an interview:
I came to New York in ’78 on an exchange program at Cooper Union, and when I went back to Boston I started performing as a duo with guitarist Kurt Henry. I didn’t have an instrument so I sang and made these background tapes for the performances. We didn’t have a drummer so that’s why I started using skipping records and things like that, to produce these rhythm tracks that we’d perform along with. We also used film loops from cartoons and sex films as audio-visual rhythm tracks. It was as much performance art as it was music. In 1980 I organized a festival (Eventworks), to explore the relation and influence of rock music on the art world. I invited people like DNA, Rhys Chatham and Karole Armitage, Dan Graham, Johanna Went, Boyd Rice, Zev to Boston. I showed films by Eric Mitchell, Jack Smith, Vivienne Dick, and others.
Marclay has collaborated with musicians such as John Zorn, Elliott Sharp, Fred Frith, Zeena Parkins, Shelley Hirsh, Christian Wolff, Butch Morris, Otomo Yoshihide, Arto Lindsay, and Sonic Youth among many others. A dadaist DJ and filmmaker his installations and video / film collages display provocative musical and visual landscapes and have been included in exhibitions at the Whitney Museum of American Art New York, Venice Biennale, Centre Pompidou Paris, Kunsthaus Zurich, San Francisco Museum of Modern Art.