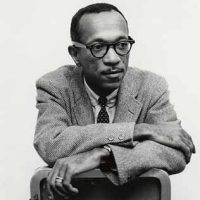 Born in Chicago, Charles W. White is one of America’s most renowned and recognized African-American & Social Realist artists. Charles White worked primarily in black & white or sepia & white drawings, paintings, and lithographs. His artwork encompassed an incredibly skilled draftsmanship and artistic sensitivity and power that has reached and moved millions.

His meticulously executed drawings and paintings speak of and affirm the humanity and beauty of African American people and culture. Common subjects of his artwork included scenes depicting African-American history in the United States, socio-economic struggles, human relationships, and portraits.

Artist Charles White and his wife Frances Barrett moved to California in 1956, which was the beginning of White’s career as a Los Angeles artist. He had several shows in Los Angeles, and was represented by the Heritage Gallery. White received numerous honors and awards and has been exhibited at the Art Institute of Chicago, Whitney Museum, Metropolitan Museum, Smithsonian Institution, National Academy of Design, and elsewhere throughout the world. He was elected to the National Academy of Design in 1972. The Heritage Gallery had represented the artwork of Charles White from the early 1960s, when Mr. Horowitz provided Mr. White his first show in Los Angeles, California.

Charles White’s artwork creates a moving record of African American life from the 1930s through the 1970s. He explained: “My main concern is to get my work before common, ordinary people …. Art should take its place as one of the necessitates [sic.] of life, like food, clothing and shelter.” As a child, White was interested in art and after high school received a scholarship to attend the Art Institute of Chicago. In about 1938 he joined the Works Progress Administration (WPA) as an easel painter and went on to create a mural of five notable African Americans for the Chicago Public Library. Between 1942 and 1943 he received a Julius Rosenwald Fellowship to study at the Art Students League in New York City, which culminated in his painting a mural about African American history at Hampton Institute, in Hampton, Virginia. After serving in World War II in 1944 as a camouflage artist, he settled in New York City. In the late 1940s, White traveled to Mexico City to make prints at the famous workshop Taller de Gráfica Popular with his first wife, Elizabeth Catlett. Settling in Southern California in 1957, White taught at the Otis Art Institute from 1965 until his death. 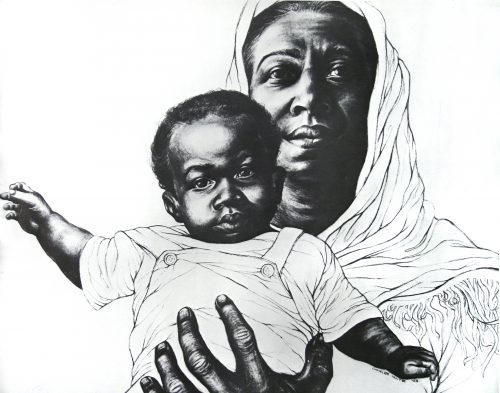