Born in Baltimore, Charles Slatkoff received a Bachelor degree from Bard College, Annendale-on-the-Hudson, New York, and a Master of Fine Arts degree from the School of the Art Institute of Chicago. The artist has exhibited both nationally and internationally and has works in public and private collections including Heller Financial, Chicago, McKinsey & Company, Chicago, Rockford Art Museum, Rockford, Illinois (promised gift) and Winston & Strawn, Washington, D.C. He has been the recipient of numerous awards including a Pollock-Krasner Foundation Grant, and a scholarship to the School of the Art Institute of Chicago. He also received the Heinrich Bluecher Scholarship to Bard College, in addition to being named a John Bard Scholar. Slatkoff lives and works in Chicago, Illinois. 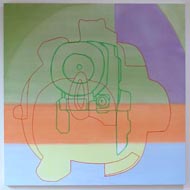