Charles Partridge Adams was born in Franklin, Massachusetts, and moved to Denver, Colorado, in 1876 at the age of eighteen. There he received his first, and only, art training from Helen Henderson Chain (1849-1892), a former pupil of George Inness. Adams traveled widely, sketching in the Colorado Rocky Mountains (1881), visiting the East Coast studios of George Inness and Worthington Whittredge (1885), and the California studios of William Keith and Thomas Hill. Largely self-taught, Adams experimented with different styles and techniques, using those that best suited his vision and subject matter.

In 1917 Adams became ill and spent the winter in Los Angeles, purchasing a home there and moving to Laguna Beach in 1926. He continued to paint until his death in 1942. Moonrise Over the Flats shows the influence of George Inness, one of the most important American landscapists of the nineteenth century. 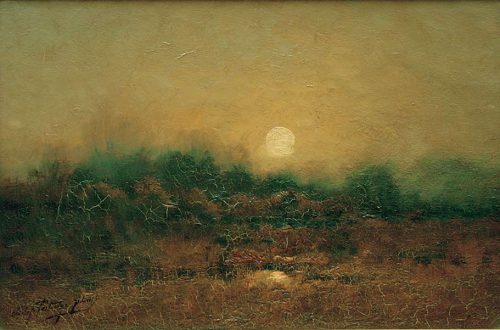