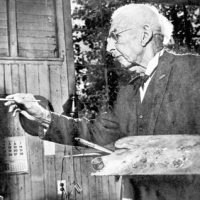 A leading landscape painter of the early 20th Century, Charles Morris Young had his widespread reputation slip away likely because he painted such a variety of subjects that he was not easily categorized. Also, he lived in Pennsylvania where the painters who retained the most attention in art-history books worked in Bucks County, a place he merely visited but did not spent much time. Only one painting, Farmhouse in Winter, survives from his time in New Hope in Bucks County.

Young was born in Gettysburg, Pennsylvania to a family that lived on a farm near the Cemetery Ridge battlefield. The family was poor but cultured, and the father’s interest in art history, especially a book on John Constable in his father’s library, stimulated the adolescent Charles Young. He spent much time sketching and painting in the environs of Gettysburg. To make money, he also carved walking sticks for tourists and sold them as well as watercolor scenes he did of the Civil War battlefields. He could not afford art school as a young man, but spent much time in Baltimore, looking at the Walters Collection, which is now the Walters Art Museum.

By 1891, Young had enough money to enroll in the Pennsylvania Academy of the Fine Arts and studied with Robert Vonnoh and Thomas Anshutz, two of the Academy’s most prominent teachers. That year, Young also began exhibiting at the annual exhibitions of the Academy, largely seasonal, atmospheric landscapes of Gettysburg, many of them bucolic scenes with cattle suggestive of Barbizon School painting. He was also influenced by animalier Henry Singlewood Bisbing, whose work Young saw at Academy exhibitions. In 1894, Young received the Charles Toppan Prize for the most promising student work at the Academy, and he joined a group of artists who met regularly at the studios of Charles Grafly and Robert Henri.

In 1896, Young joined the faculty of the Philadelphia School of Design for Women and remained a student at the Academy. The next year, he went to Europe, and enrolled at the Academie Colarossi in Paris. However, he did not have much interest in the formal academic training and spent much of his time learning from studio visits to famous painters. He became a good friend of another American student, Frederick Frieseke, and they traveled to the Netherlands together.

Charles Young married Eliza Middleton Coxe, a student at the Pennsylvania Academy, in the early 1903, and they went to Paris where Eliza enrolled in the Academie Colarossi and Young prepared exhibition paintings for the 1904 St. Louis Louisiana Purchase Exposition. At the suggestion of Mary Cassatt, American painter living in Paris, the couple went to Giverny, the home of impressionist Claude Monet, and spent the summer of 1905 living there. The next year they returned to Giverny after spending the winter in Paris and renewing the friendship with Frieseke who was also at Giverny.

In 1905, the Youngs returned to Pennsylvania and lived in a home on land of Eliza’s family at Jenkintown. At this time, Young “adopted a sun-drenched impressionist palette and light, quick brushwork” and also did winter scenes “of snow, and sunshine and frosty crystalline air.” (166) Young painted in various New England locations including Cos Cob, Falls Village, and Old Lyme, Connecticut. Between 1906 and 1947, he had a series of solo exhibitions including at the Copley Gallery in Boston in 1911. In 1926, he was awarded the Stotesbury Prize from the Pennsylvania Academy for the best group of pictures at the 1926 annual exhibition.

The Youngs began spending a part of every summer in Maine beginning 1914, settling in Southwest Harbor where he produced dozens of “beautiful scenes of Somes Sound, southwest Harbor, and the Atlantic Ocean.” (167). The tone of these paintings was more sombre than his earlier American impressionist work. In 1917, the couple moved to Radnor, Pennsylvania, where they established the home where they lived most of each year until their deaths, Eliza in 1950 and he in 1964 at age ninety-five.

In his later years, Young spent much time retouching canvases. He also took up the painting of the sporting subjects of fishing and golf. After his wife’s death, Charles Young remained in their Radnor home, and had a devastating fire that destroyed more than 300 of his paintings. Tragically, many of them had been returned to the home for the filming by their son, Christopher Young, of a film biography of his father. Titled Nature Is My Mistress, the film is the only visual record of many of those paintings that were destroyed. 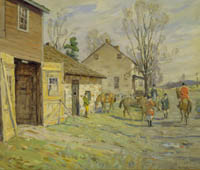