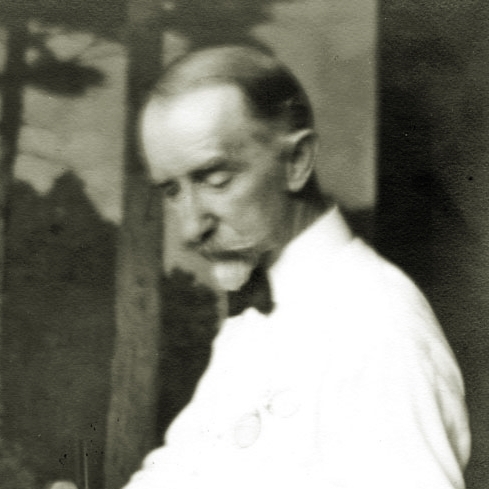 Charles Warren Eaton was born in Albany, New York. In 1879 he moved to New York City, where he enrolled at both the Art Students League and the National Academy of Design. By 1882 he was exhibiting at the National Academy of Design, and scored an enviable success when no less an arbiter of taste than Oscar Wilde bought one of the works, a scene from Staten Island. In 1886 Eaton visited France, Belgium, Holland, and London. In 1888 he moved to Bloomfield, New Jersey, which is adjacent to Montclair, where a robust and growing art community had developed around renowned painter George Inness. In the town and its surroundings, Eaton found plentiful subjects in the woods, pastures, and ponds. In 1889, he rented a studio adjacent to Inness’s at the Holbein Studios at 139 West 55th Street in New York City. About 1900, Eaton discovered the white pine forests of Connecticut, near his summer haunt, the village of Thompson. For the ten years that followed, he made the white pine tree motif his primary subject, depicting it in tonal oil paintings, watercolors, monotypes, and pastels. In the early twentieth century, Eaton began to spend more of his annual trips abroad in Belgium and Holland. After 1910 he began extended stays in Italy, returning to Venice and staying for the first time at Lake Como. As his paintings of Italy reveal, Eaton seems to have abandoned tonal painting in favor of realism, after about 1910. He continued to paint in New Jersey and Connecticut during the ensuing years, but eventually he moved his summer retreat from Thompson to Colebrook, Connecticut. His late landscapes focus on the nearby countryside around Colebrook. While incorporating the pine tree theme, these works are painted in higher key colors than those rendered before 1910, and they depend to a greater degree on topographic specificity and a traditional use of perspective. In 1921 Eaton was hired to paint Glacier Lake, in Glacier National Park, by the Great Northern Railroad Company as part of their “See America First” campaign. The approximately twenty-one paintings that resulted were among the artist’s last works. 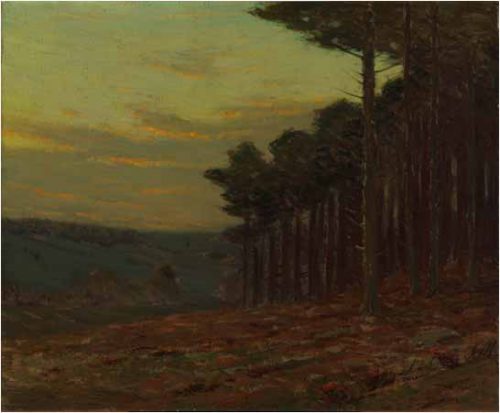