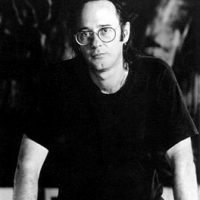 Carlos Alfonzo was born in Cuba in 1950. He received a degree in art from the Academia San Alejandro in 1973 and in art history from the University of Havana four years later. He taught and exhibited in Cuba in spite of extremely difficult conditions. In 1980, after days spent crowded into the Peruvian Embassy, Alfonzo left by sea on a journey that was marred by violence.

His work was represented in the Outside Cuba exhibition and the Cuba-USA: The First Generation traveling exhibition and he was the subject of several solo exhibitions in institutions such as the Miami Art Museum, the Southeastern Center for Contemporary Art in North Carolina, the Bass Museum of Art in Miami Beach and the Hal Bromm Gallery in New York. His work was featured in Triumph of the Spirit: Carlos Alfonso, A Survey 1975-1991, published by the Miami Art Museum. He is one of the artists profiled in Maria Lino’s 1988 documentary film Three Artist Profiles. Alfonzo studied at the University of Havana. His work is in the permanent collection of the Miami-Dade Public Library.