Carl Homstad was born in 1951 in Denver, Colorado, and graduated from Luther College with a BA in art in 1973. In 1971-72 he studied at the Institute of European Studies in Vienna, Austria. Following his graduation from Luther he remained in Decorah, Iowa and established Homstad Studio and Gallery to pursue work as an independent artist and printmaker. He returned to Europe for independent study in 1979 and in 2003 spent time pursuing his work in China.

Homstad is best known as a printmaker who creates colorful woodcuts of local and regional scenes, but he also paints in both watercolor and oil and has created dozens of public murals in Iowa, Minnesota, and South Dakota. His work has been included in numerous juried and invitational exhibits and featured in several solo shows, including the Lakes Art Center in Okaboji, Iowa; the Witter Gallery in Storm Lake, Iowa; the Fanny Garver Gallery in Madison, Wisconsin; the Iowa Artisans Gallery in Iowa City, Iowa; and the Pump House Art Center in La Crosse, Wisconsin, to name only a few. His several awards include Best of Show at the MacNider Outdoor Art Fair in Mason City, Iowa; a Best 2D Award from the Valley Junction Art Fair in West Des Moines, Iowa; and a Purchase Award from the Northern National Show in Rhinelander, Wisconsin. In 1995 he received a grant from the Iowa Arts Council to create woodcut images for An Iowa Alphabet of Trees, in collaboration with poet Michael Carey, and in 1986-87 the Iowa Arts Council sponsored a touring show of his work titled A Printmaker’s Portrait of Rural Life. His work has been featured in Artist’s Magazine and on the Iowa Public Television program, Living in Iowa, and it can be found in numerous private and public collections throughout the Midwest. In 1998 he received a Distinguished Service Award from Luther College. 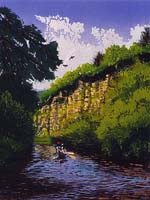 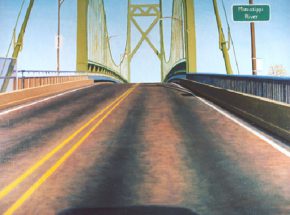