Billy Hassell reinvents the American landscape with his colorful interpretations of the Southwest. Recognized for his bold use of shape and imaginative renditions of plants and animals, this Texas native has made a career of painting the flora and fauna indigenous to this region of the country. Panoramic landscapes and iconic, patterning form of painting characterize his work. Oils on canvas, watercolors and a new suite of small format color etchings created at Austin’s Flatbed Press are current examples of his work.

Hassell’s love of nature is evident in every work he creates. The bold scale of his primary subject, birds in nature, are superimposed on a stylized landscape. His vibrant use of color continues to be a recognized characteristic of Hassell’s work.

Billy Hassell’s attention to detail is consistent with his ability to convey his observations of nature, often rendered in a simplified manner. Many of his paintings, present a cacophony of pattern and color found in nature that “startle perspective and toy with balance.” This replication of nature’s patterning is evident throughout Hassell’s work. Whether painting birds, a rainbow trout or land furrows, the artist makes patterning a primary element in almost every painting.

His creations often become surreal. By combining the intricate natural patterning of the bird on a somewhat Baroque design for a background, he artificially camouflages, or optically confuses the relationship between background and foreground of the composition. A good example of this treatment is the large oil on canvas, “Wake Up Call.” In this painting, Hassell presents a very dominating rooster placed in the center of the canvas. The rooster is painted in profile in front of an intricately rendered black and white floral background.

Alive with color and infused with both humor and a passion for the outdoors, Hassell’s work has received acclaim throughout the United States. His paintings are included in the permanent collections of the Menil Collection and the Museum of Fine Arts in Houston, the Modern Art Museum of Fort Worth and the Dallas Museum of Art, not to mention numerous corporate and private collections. Hassell was recently included in the inaugural exhibition of the Gallery of Contemporary and American Indian Art in Tucson. Hassell received his BF A at the University of Notre Dame in 1978 and continued at the University of Massachusetts, where he received his MFA in 1982. 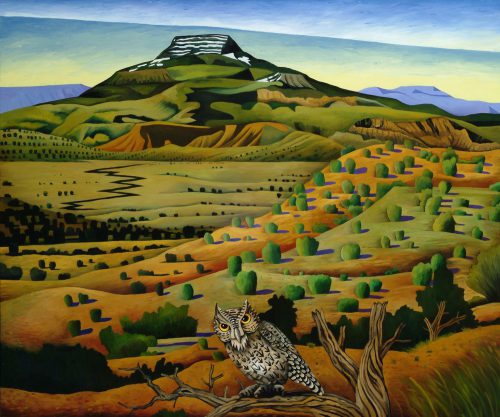