Beverly Pepper began her career as a commercial art director in New York City but soon decided to study painting in Paris. After years of painting, Pepper shifted her focus to creating monumental outdoor sculpture. She is a pioneer in her use of ductile iron, a new industrial material that is more castable and malleable than other kinds of metal. It allows greater opportunities for variations in texture that can enliven a structure and endow it with a sense of personality. “Severio Column,” for example, reaches vertically toward the sky, functioning as a beacon or totem. Although a slender structure, it communicates a feeling of inner strength to match its outer durability.

Pepper works directly with engineers, draftsmen, welders and technicians when creating her cast sculptured forms. Recently, she made a set of thirteen vertical sculptural forms all similar to “Severio Column,” but each varying in shape and size. They were installed in a circular and symbolic setting that recalled pagan symbols of the prehistoric past. 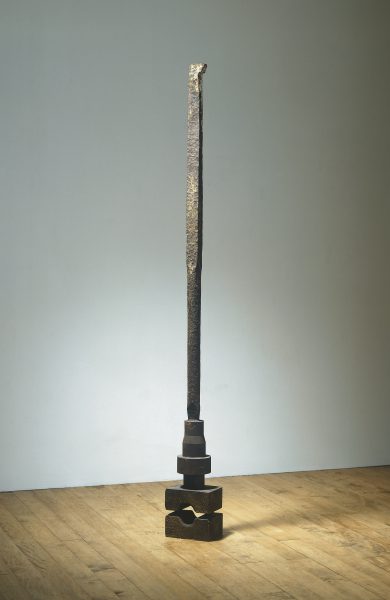