Ben Carlton Mead, western artist and book illustrator, was born in Bay City, Texas. His father opened yards for lumber companies in Texas, and the family moved frequently while Mead was growing up. He first painted in Lamesa (Texas) at age thirteen and attended high school in Amarillo, where he painted theatrical posters and stage scenery, and worked as sports editor for the Amarillo Daily News. After graduating from Amarillo High School, Mead studied at the Art Institute of Chicago (Illinois), where he received instruction in illustration from Jerome Rozen and Charles Schroeder. In 1923 the artist married Maida McAfee, with whom he had two daughters and a son.

Mead began his career as a designer for the Sunset Advertising System in San Antonio. He subsequently opened his own commercial art studio in San Antonio,
Texas, where he illustrated magazines, newspapers, and books. He gained recognition as an artist when he illustrated J. Frank Dobie’s Coronado’s Children in 1930. This led to illustrations in subsequent works by Dobie and other Texas authors. During the 1930s Mead taught at Amarillo College and conducted classes in his studio, which he called “my little art school.” He lived in a ranch house in Palo Duro Canyon, twelve miles south of Amarillo.

Mead moved to Dallas, Texas, in 1941 and worked for eleven years in a commercial art studio. He subsequently served for fifteen years as art director for an advertising firm. He helped organize the Dallas Corral of Westerners International, a group devoted to the study of the American West, and served for a time as its president. He was also active in the Texas Folklore Society, for which he designed the official emblem, the paisano or roadrunner symbol, which was chosen for the society by J. Frank Dobie. As a member of several art organizations, including the International Society of Artists, Mead was often invited to speak at conferences. After retiring from the advertising business in 1967, he devoted himself full time to painting and historical research.

Mead was well known for his strict attention to historical accuracy and painstaking detail. He supplemented his encyclopedic knowledge of western lore by hiking through most of the western United States and parts of Mexico, sketching “anything and everything with the look of the Old West.” His work often has historical referents. The Comanche Horses of Tule Canyon (private collection, Santa Ynez, California), for example, depicts fleeing horses, followed by a procession of “ghost horses” descending from a moonlit sky; the subject represents the 1,024 mounts shot by federal forces to prevent the ambushed Comanche Indians from escaping after the battle of Palo Duro Canyon in 1874. His painting The Law West of the Pecos, a still life with a gun, notary seal, handcuffs, dagger, and a single volume of law, documents the implements used by the legendary Judge Roy Bean (c. 1825-1903) to mete out justice from his saloon in Langtry, Texas.

Mead moved in 1981 to California, where he taught painting and drawing in his studio in the Santa Ynez valley. His paintings are displayed in several Amarillo banks and other office buildings, and many of his original drawings are housed in the Research Center of the
Panhandle Plains Historical Museum. A list of books illustrated by Mead up to 1975 is contained in Jeff Dykes’s Fifty Great Western Illustrators (1975). 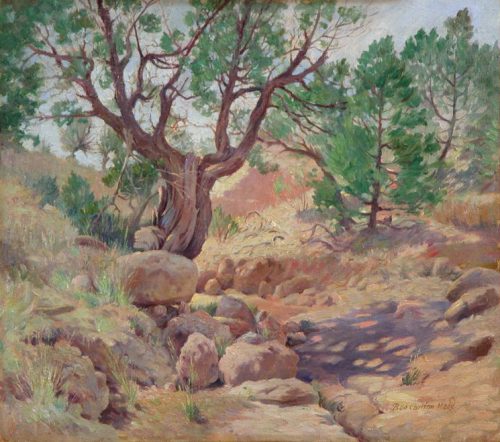 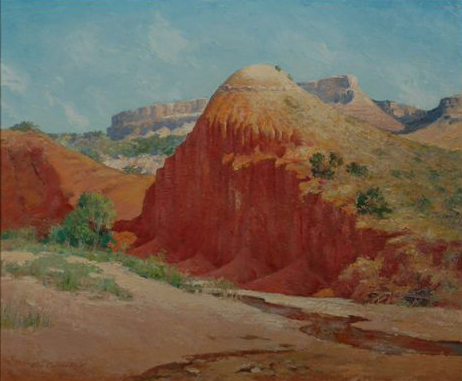