A native of Ohio, John Henry Twachtman created paintings that bridged the gap between impressionism and the greater abstraction that would emerge in the coming decades. Like many of his contemporaries, Twachtman traveled to Europe as part of his artistic education. He studied in Germany, the native country of his immigrant parents, in the 1870s, and then spent time in Paris in the 1880s. By the late 1880s, he had returned to the United States, settling in Greenwich, Connecticut. The gentle countryside around Greenwich would serve as an inspiration for many of the landscapes he would later paint.

Twachtman is best known for his landscapes, which have a somewhat mysterious quality. Using the same loose brushwork as impressionists to capture a sense of immediacy and the fleeting nature of a moment in time, Twachtman pushes his paintings toward abstraction. His landscapes not only suggest the natural world but also bring the viewer’s focus to the formal qualities of line and color and light.

As his friend the impressionist painter Childe Hassam said upon Twachtman’s death in 1902, “His works were sensitive and harmonious, strong, and at the same time delicate even to evasiveness, and always alluring in their evanescence.” 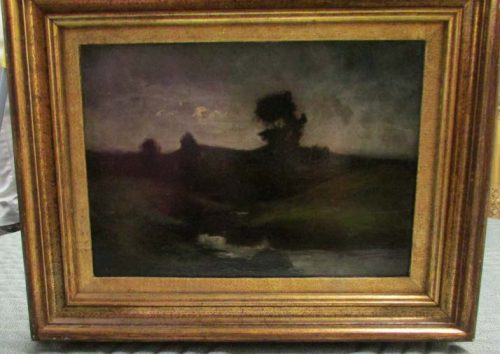