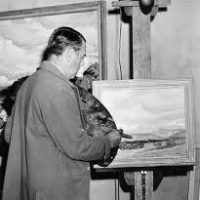 Arthur Hill Gilbert was educated at Northwestern University, Evanston, Illinois. After graduation he entered the United States Naval Academy at Annapolis, Maryland, and later served as an ensign in the U.S. Navy during World War I. At the end of the hostilities, he received a discharge from the navy and traveled to France, where he decided to study painting.

In 1929 Gilbert settled in Monterey, California, and became known for his landscapes and coastal scenes of the Monterey Peninsula. With taste, instinctive feeling, and a compete mastery of his craft, he daily discovered new and enchanting subject motifs – noble hills, majestic oaks, giant rocks, beating surf, and cloud formations of surpassing beauty.

During his later years, the artist spent most of his time on his ranch near Stockton, California, where he died.