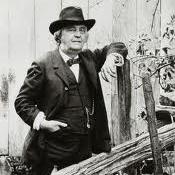 Arthur Fitzwilliam Tait arrived in New York City from Liverpool in 1850. In the early 1840s in Manchester, England, he had worked for Agnew’s Repository of the Arts where he was exposed to the art of Edwin Landseer and John Frederick Herring and was encouraged to try his own hand at the lithographer’s art. Barnyard, meticulously recorded in Tait’s Register as item 155 for the year 1860, demonstrates his strong familiarity with English sporting paintings and prints.

Tait’s kinship with Herring is apparent in the similarity of this painting of December, 1860, to Herring’s account of his own painting (1861, title and location unknown) less than a year later: “It represents a stable, a white horse … white ducks, brown ducks and a black cat,” and Herring continues, noting his “colourman’s compliment” on his “management of white, at all times a difficult colour to treat without appearing dirty.” Like Herring, Tait was above all a colorist, and the white horse dominates his scene, its whiteness enshrouded by a dark background and circumscribed by a blue-green wall with shuttered window at the right. The white horse is solitary in his stature and nurturing role.

After 1862, Tait’s production of horse paintings declined as he turned increasingly to deer hunting and Adirondack sites for his sporting subjects. However, his pride in this genre is evidenced by his having exhibited a painting of the same size and date as Barnyard in the National Academy of Design show in the spring of 1861. His choice of Feeding Time (1860, location unknown) over Barnyard for the exhibition may have been determined by its inclusion of a figure raking hay, which suggested greater academic proficiency. Barnyard was purchased by Mr. C. B. Wood, whose name occurs a year earlier in Taifs Register when he purchased a small oil, Deer, Buck and Doe (n.d., location unknown). The same painting appears in the National Academy of Design Exhibition of 1859 as Deer, owned by Mr. C. B. Wood. Mr. Wood’s importance as a collector of Tait can be readily established by the hefty price he paid for Barnyard.

Tait’s specificity in signing “Morrisania” on this oil marks a moment of joy in his life. He and his wife Marian had purchased a farm in Westchester County just a year before, which provided him with the opportunity to paint animals out-of-doors, thereby capturing the effects of light and color in a manner that was not available to the prestigious Mr. Herring.