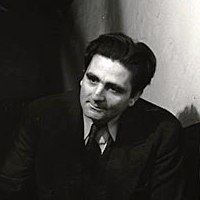 Aristodimos Kaldis (August 15, 1899, in Dikeli, Asia Minor, Turkey – 1979) was an artist and left-wing activist in New York.
It is impossible to think of East Tenth Street and of the gallery and museum scene during the 1950s without including Kaldis in the picture. His friendship with leading members of the New York School dated from the 1930s. During the 1940s he sometimes supported himself by giving lectures on art and archeology in a room at Carnegie Hall – with Willem de Kooning at the slide projector. These lectures were attended by large numbers of New York artists.
Also during the 1930s he participated with Communist League of America in organizing the 1934 New York Hotel Strike with B. J. Field and Ben Gitlow. When the union leadership under the latter accepted concessions that were not acceptable to the CLA leadership they were expelled and joined Gitlow’s sect, the Workers Communist League, to form a new group called the League for a Revolutionary Workers Party.
However, Kaldis was much more than a somewhat eccentric public personality. He was also a painter, and a good one. Since 1979, the year of his death, there have been several exhibitions of his work, including one in 1985 at the Artists’ Choice Museum. The catalogue, containing memoirs and reproductions of some of his best paintings, is marred only by a caption below a photograph of Kaldis and Philip Pavia, the sculptor that identifies Pavia as Franz Kline. (Both artists were close friends of Kaldis.)
www.en.wikipedia.org/wiki/Aristodimos_Kaldis