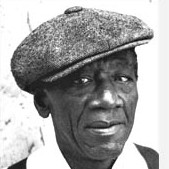 Andre Pierre was born in Port-au-Prince, Haiti. He was an active Vodou practitioner and farmer until the 1940s when the American film-maker Maya Deren, who had admired his temple wall paintings, introduced him to the Centre d’Art. Pierre eventually became a Vodou priest internationally noted for his highly respected visualizations of the Vodou pantheon of deities in his paintings. He continued to paint in his family compound and Vodou community located in Croix-des-Missions on the outskirts of Port-au-Prince. In 1996, Pierre was the gold Medal Winner at the 5th Venezuelan Biennale. His work is included in the permanent collections of the Davenport Museum in Iowa, the Milwaukee Museum of Art, the Wadsworth Athenaeum in Hartford, Connecticut, and Ramapo college in Mahwah, New Jersey.