An Hong studied graphic design at the Central Academy of Arts and Design in Beijing, graduating in 1985. From 1985 to 1994 his modern, highly stylized calligraphy and ink paintings caught the attention of both national and international audiences. From 1992 to 1994 he went to the Lahti Academy of Design in Finland to lecture on Chinese calligraphy, and travelled around Europe.
An Hong’s most indelible mark on the Chinese art scene is to be found in his Buddha performance pieces and photographs, also known as JG2 or Jingang, a reference to a class of indestructible divine warriors who protect the Buddha and his doctrine. In these works, An Hong cloaks his own gold-painted body in an elaborate costume of his own design and construction and takes on the persona of a modern-day living Buddha, often appearing in sexually provocative poses. The series is formed from an eclectic mix of Buddhism, Chinese opera, popular culture and kitsch iconography. An Hong’s ‘living Buddha’ provides cures for modern-day ailments such as stress, AIDS or a lack of love. Messages of this nature are incorporated into his performances or photographic images through actual propaganda signs and absurd humour. During performances he often gives massage therapy or distributes concoctions of Coca-Cola and Chinese medicine to audience volunteers.
An Hong has performed his living Buddha in ‘Fortune Cookies’ at the Institute of Contemporary Art, London, and exhibited his photographs in the 1999 Biennale de Lyon (France) and in ‘Portraits, Figures, Couples and Groups from the Mcaf Foundation’ (BizArt, Shanghai, 2000). He teaches Graphic Design at the Beijing Arts and Design Academy. 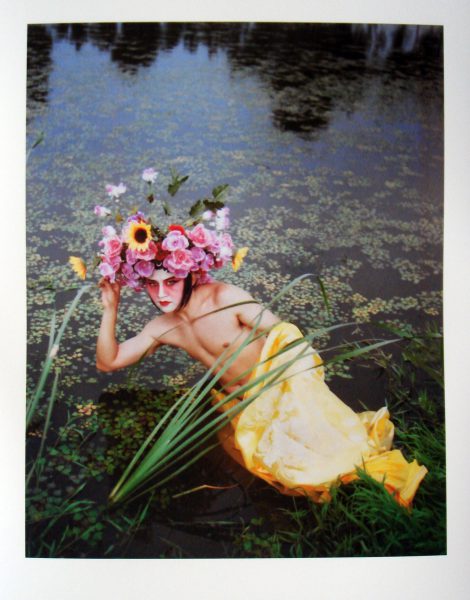