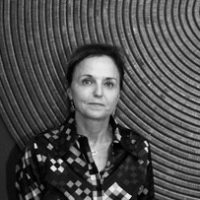 Alice Hope was named 2018 “Woman to Watch” for New York by the National Museum of Women in the Arts. She holds an M.F.A. from Yale University, and shows at
Ricco Maresca Gallery in Manhattan. Alice has created numerous public and residential
commissions, among them a large-scale magnetic installation, “Under the Radar”, in 2012, at Camp Hero State Park in Montauk, NY for the Parrish Art Museum.
She often incorporates binary code and repetition in her compositions. In her 2013 Armory Show Project, Alice was commissioned by the Fair to create two public
works; one panel innumerably repeated the binary code for the word “love”, and the other repeated the code for “blind”. In 2013, she inaugurated WNYC Greene Space’s new lobby, where she installed a dense site specific work with thousands of neodymium magnets and pieces of ball chain. She was an artist in residence at the Museum of Art and Design from 2014-15, and then built a six month site-specific installation outside
the Queens Museum with more than a million used can tabs. This work was part of a wider project that reckoned the fluctuating value and meaning of can tabs in continually changing contexts. In 2018, she had a one person show at Guild Hall in East Hampton, NY, and the National Museum of Women in the Arts, in Washington, had three of her installations on view.