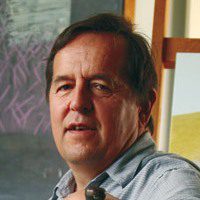 Alan Bray was born in Waterville, Maine, on January 12, 1946, but he grew up in Monson, a small slate-quarrying town set in the northern reaches of the Appalachians. It was here, hiking and camping with liked-minded childhood friends, that he began to exercise his natural inquisitiveness as a tool for building woods-craft. In these rugged foothills, ever alive with the turning of the seasons yet always plainly bearing the imprint of eons-old geologic upheaval, Bray learned to find his way around in a world of enigmatic signs and divergent trails. Unwittingly, before ever picking up a brush, he developed the sensibilities of a landscape painter by developing sensitivities to the relationships between the living and the ancient land on which life depends.

Later, when Bray decided to study art formally, he enrolled in the Art Institute of Boston, where he first felt the appeal of image-making as a way of understanding the world. Three years of studio work revealed the need for a more traditional approach to the discipline of painting, one informed by the broader range of a liberal education, a revelation that prompted Bray to enroll at the University of Southern Maine, from which he graduated in 1971. While this education was in many ways a success – particularly in the way it engendered literacies in fields outside the fine arts – it was nevertheless incomplete: well-prepared now for the next leg of the journey, Bray traveled to Florence to study at Villa Schifanoia Graduate School of Fine Arts.

Bray and his wife Diana, now the parents of two grown children, live not far from Monson in Sangerville, where they settled thirty years ago, on their return from Florence, and where, with the like-minded friends of his adulthood, Bray participates generously in promoting the arts and community enrichment in the spare, small-town culture of a rural state. But his work as an artist is to paint a record of the quiet panorama of life unfolding on the margins of the central Maine farmland and in the woods beyond the towns. A close, careful, and astute observer, he frequently finds the subjects of his paintings in events and processes that elude an eye less keen, or a mind more intent on discovering Nature’s grandeur.