Al Souza transforms the ordinary into the extraordinary with his sculptural panels and intricate works on paper. Each panel consists of numerous puzzles, found in thrift stores and on E-bay, assembled in large segments. The fragmented imagery – animals, toys, skyscrapers – placed on top of one another, creates a cacophony of the commonplace, with copious amounts of richly colored images layered together in unpredictable and amusing combinations. Souza applies a similar approach in his paper works, overlaying pieces of cut posters, prints and even Braille paper, each lace-like layer further abstracting the one below.

From a distance, Souza’s large works are fantastic abstractions of color and texture. When viewed up close, individual sections in each work become apparent, creating intriguing and unique narratives. Within each panel or work on paper, Souza creates an alternate presence for the everyday objects, building and molding them into a new, greater whole.

Al Souza has shown his work internationally since 1973, and is the recipient of a Pollock-Krasner Foundation Grant, a Rockefeller Foundation Grant and a National Endowment for the Arts Visual Arts Fellowship. Souza’s work is included in the collections of the J. Paul Getty Museum, the Yale University.

Souza makes use of a complex combination of found puzzles in varying states of completion to create layered compositions. These works overwhelm the eye with intense detail and create a rich tapestry of colors when considered as a whole. This exhibition is SOUZA’s first in New York since he exhibited his monumental work The Peaceful Kingdom in the 2000 Biennial at the Whitney Museum of American Art.

In addition to the puzzle works, SOUZA will be exhibiting his new Spitball pieces made over fourteen consecutive days from pages of each day’s New York Times. Created during a recent artists residency, these works were inspired by the synergy of his close interaction with writers. While writers were transforming the majestic landscape views into language, Souza physically altered the printed word to produce a purely visual work. The rhythmic process of shaping the subtly colored spitballs is a form of meditation for Souza.

Also on view will be a selection of cut paper works using atlas pages, sheet music, and weather charts. Reconfigured into seemingly random layers of overlapping, meticulously cut out ovals, these works allow the viewer to recognize the hidden beauty in the mundane source materials. As with the puzzle paintings, Souza’s instinctive sense of balance counteracts the chaos produced by the layering of the imagery.

Al Souza grew up, in the 50’s, on the East coast of America. He trained, initially, as a Civil Engineer and then transferred to New York where he studied Fine Art for four years. Always combining studio work with teaching he has had many exhibitions both in the States and Europe.

Souza, in his work over the last 25 years, has both respected and challenged earlier concepts and art movements. Although, like many contemporary artists, his ultimate aim is to develop and create his own visual language, Al Souza is the first to admit the crucial influence of the Arte Povera movement (which emerged in Italy in the Sixties). In the context of his work one can remember Arte Povera as a series of fragments: fragments of plaster casts, fragments of meaning and fragments of words combined with fragments of material. Often work from this movement included found materials presented or looked at in another way and thereby given new context and meaning. A similar process is central in Al Souza’s works. As the artist himself says “For the past few years I have mainly been working with found materials. Some have been natural like fungi or barnacles. Some have been man-made like newspapers or jigsaw puzzles; but in each case they were made (into a finished work) in the place where they were found”. For example, in Austria in 1995, he worked mainly (during a two month residency) with the newspapers that he read each day. By cutting holes in chosen sheets, lying them in several layers on top of each other, the viewer (of the final work) was never given the whole picture; just fragments of stories remained. Other work with cut paper has been the series working with Soil Maps (which were found originally in a rubbish skip). Same process, similar effect but here Souza is tackling, and re-presenting for us to see the fundamental structure of the earth we live on. More random (visually) are the works in his puzzle series. Here the title of each work describes the original jigsaw image but this is, of course, now indiscernable – never to be reassembled again.

As Al Souza states, “The most interesting factor to me, as an artist, is that I don’t know what’s there. I have always intentionally changed my living situation so that, in turn, my work becomes a reflection of that physical change and its subsequent psychological consequences. My work has been a visual extension of my life at any given time.” 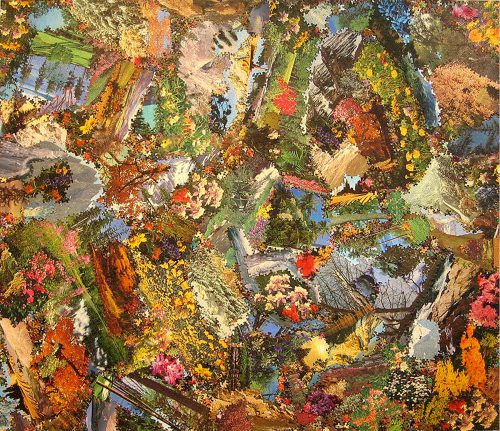 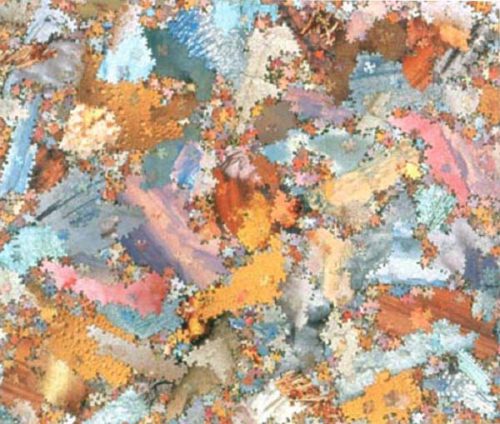 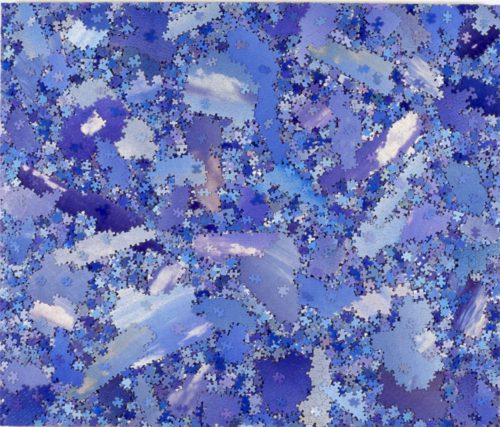 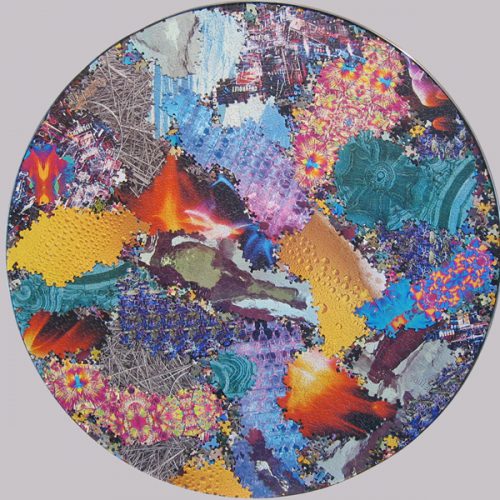 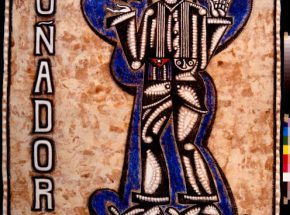 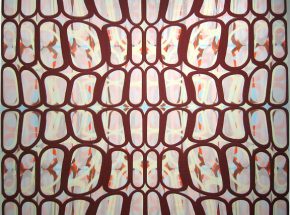