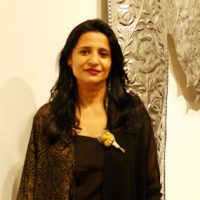 Pakistani artist Adeela Suleman was born in Karachi, Pakistan, where she lives and works. She received a Master of Arts degree in international relations from the University of Karachi (1995) and then returned to receive a Bachelor of Fine Arts degree in sculpture from the Indus Valley School of Art and Architecture also in Karachi (1999), where she is currently an assistant professor. Her art investigates the problems of form and is charged with political, gender, and social concerns, particularly as manifested in contemporary Pakistani culture. The elements reflected in her work are symbolic and personal. She has said, “There are multiple stories that I am thinking, from my past and present and that have been part of my life. But they could be anyone’s stories and people can relate to…”

She experiments with found objects such as metal strainers used in drainage in bathrooms, and common objects such a car mufflers and gear shifts and their meaning in triggering memories or stimulating our imaginations. Her approach is to decontextualize, to remove an object from its mundane classification and replace it with a new identity. The artist uses unusual materials that depict serious themes such as safety, terrorism, death, destruction, confinement, and women’s empowerment are at times imbued with comic elements. Working with ceramic, steel sheets, pipe fittings, relief, and freestanding forms, she comments on the evolution of her work: “It has been a natural evolution for me. My college projects used to be about found objects, where I once made a tea fountain in a shrine. I then worked with motorcycles. The presence of utensils in my work came from using gadgets that made the life of women easier. So, I was making these objects my own. Now, I am using the skin of these objects to make the artwork. There is a loss of humor compared to earlier works because I am talking more of death in this suite of works.” Her art—often characterized by beautiful surfaces and intricate details—has been exhibited in Lahore, New York, London, Milan, and Karachi. 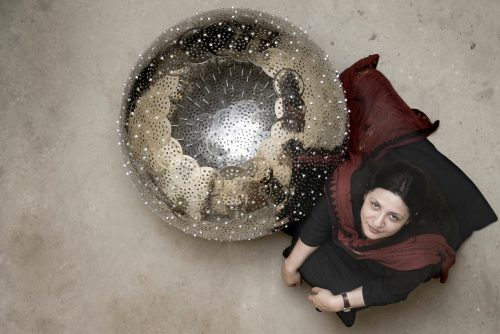 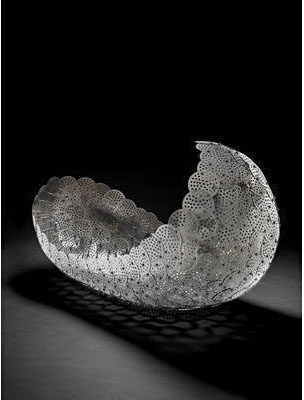