“Today I went to meet the curators of the zoological collection at Anton de Kom University. Great visit with yet another set of absolutely delightful, charming and kind people. And generous with their time to allow me to take photos of bugs and spiders and butterflies, when I know they have much else that needs doing. There is a fish that lives here, a catfish, which has 2 rows of armor scales. People here like to eat them. But what is amazing about this fish is that it builds a nest of sticks and debris, then fills underneath that pile with bubbles! The fish lay their eggs inside the foam! Other fish make redds, nest type structures that are more of a scooped out place in sand, but this nest is Above Water, though the eggs are below in foam. Amazing. I am trying to figure out how I could include this too! I need to make a painting that is about 20 feet wide to do justice to Suriname’s diversity!”

On February 12, Isabella Kirkland travelled from San Francisco to Suriname to do research for her large scale painting commission for the new U.S. Embassy in Paramaribo. The artist travelled to different locations within the country. One of the trips was to Brownsberg with Sean Dilrosun a local environmental activist. Brownsberg (“berg” means mountain) is the oldest national park in Suriname and some of the structures are in need of repair—it is in the middle of the jungle, ten kilometers up a dirt road. Kirkland remarked: “…I did not mind sleeping in a cabin full of funky bunk beds. The sheets were clean and the cabin Sean chose was on the edge of the compound of cottages, on a steep hillside with a view out over the broccoli forest to the distant lake, the largest fresh water lake in the western hemisphere.” It usually takes time to see animals in a rainforest, or any other forest for that matter. “Science films make it look like the jungle is teeming with dangerous creatures and poisonous plants that want to kill you. And there are dangers like snakes and jaguars and eagles. But, for the most part, you walk and sit and stand and wait for something to happen. And sometimes it takes quite a while, requiring patience and observation. It was a good thing that Sean is observant because as we made our way back to the cabin from a walk out to a viewpoint called Mazaroni Top, there was a fer-de- lance. Sean jumped about five feet. A VERY poisonous snake, it was right between his feet. He was wearing boots, but still…….”

Kirkland also spent a fair amount of time at the house of Monique Pool, who has turned her home into a sanctuary and research center for endangered species such as sloths and anteaters. “I went back to Monique Pool’s house for the afternoon to try to understand the sloths and particularly to watch Artillio George, the current resident giant anteater. You would think that such an animal, with a 3 foot tongue and the smallest mouth you can imagine, would be docile. However, giant anteaters can be dangerous if provoked. Their claws are long, strong, curved, and sharp and the forelegs are extremely strong. It took me all afternoon to get the right photos and observations to understand how anteater feet work. Then I did the same thing with the sloths. I would love to see an articulated skeleton to figure out exactly how their shoulders work and their foot bones. Sloths have 9 vertebrae in their necks giving them the capacity to turn their heads and see in nearly 180 degrees…slowly…as with everything sloth…”

In addition to doing research with local environmental specialists in different locations in the country, Kirkland traveled to Moengo, the location of an artist residency and community outreach program spearheaded and run by artist Marcel Pinas in the former buildings of the Alcoa mining company. The U.S. Embassy public affairs team had organized an environmental film festival in Moengo and presented two films—one that featured the dangers of mercury toxicity from gold mining for the older teens and one about the rainforest bio-diversity for the younger students. Kirkland found them to be “amazingly well behaved kids …. they had to carry an additional 40 chairs into the gym/auditorium/hall and did so without much fuss.”

The artist was able to make sketches and studies that would be used for her final commission which she hopes to finish by the end of 2016. During her time in Suriname, Kirkland not only did hours of research into the natural world, but also managed to spend time with artists, saying, “I met with a wide variety of people from several countries, ethnicities, and metiers. Art professionals, artists, writers about art, curators, and museum professionals from Suriname, Holland, New York, California, French Guyana. All so open and warm!” 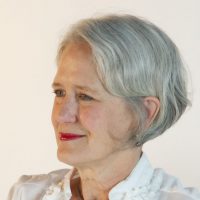